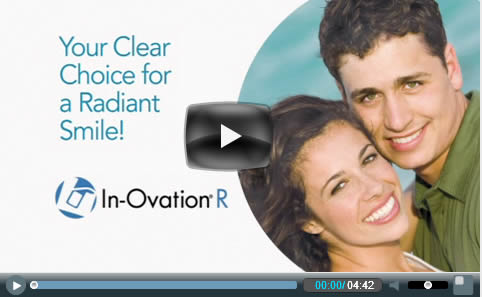 Braces as we know it, have been around for about one hundred years.  In the 1970’s, traditional braces that were bonded (glued) on the teeth, became available.  This revolutionized orthodontics.  It made it easier and more hygienic to place brackets on the teeth.  In the late 1990’s, another revolution in bracket design began to surface.  The self-ligating orthodontic bracket was brought into the orthodontic mainstream.  After about a decade of perfecting this system,  the technology is now available to have a truly efficient, reliable, self-ligating bracket system.  We are proud to be in the forefront of orthodontic advances by using GAC In-Ovation self-ligating brackets.

Traditional braces use brackets with open slots.  The arch-wire, which moves the tooth, is tied into the bracket by placing a metal or elastomeric tie around the bracket.  The reason that traditional braces do not work as efficiently as the In-Ovation brackets, is that the ties around the brackets create friction and do not allow the arch wire to move freely in the bracket slot.  This friction does not allow the wire to fully express itself, and the tooth will not move as much as its full potential.  This slow down in tooth movement forces the orthodontist to activate the wire more often, thus increasing the force ratio onto the tooth and increasing the number of visits required for each orthodontic activation.

In-Ovation self-ligating brackets have a self closing “door” built into the bracket itself.  This patented design reduces potential plaque accumulation, and dramatically reduces the frictional forces exerted onto the arch wire which moves the teeth.  Less friction translates into a more efficient system to move teeth, requiring less force, and fewer activation appointments.  The overall result for the patient is less discomfort, less visits to the orthodontist, and faster movement of teeth.

In-Ovation self ligating brackets look great and are comfortable to wear.In-Ovation R (metal) brackets are smaller and has a lower profile than other self- ligating brackets.  With no elastic or wire ties, you will have less irritation, less plaque build-up, and less difficulty in keeping your teeth clean